Welcome to the addition worksheets page at Math-Drills.com where we will add to your learning experience in many positive ways! On this page, you will find Addition worksheets from addition facts and two-digit addition to column addition and addition with games. In the first section, we've included a few addition printables that should help out the beginning student. Teaching addition facts is best done with some interesting teaching strategies.

Some teachers and parents use addition manipulatives to help students understand the basic addition facts. For example, adding groups of "Apple Jacks" (a breakfast cereal) by counting will quickly lead students to understand the concepts of addition. The sooner you can introduce base ten blocks to your students, the better. If you haven't already used them for counting, use them for basic addition and show students how regrouping works.

Most Popular Addition Worksheets this Week 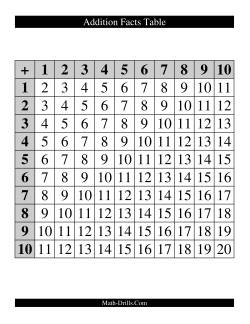 Addition works very well as a table since the addends can be sequential. Encourage students to look for patterns and teach them a variety of strategies to learn the addition facts. For students who have not yet memorized their addition facts but need to know them for a more advanced math lesson such as adding two-digit numbers, provide an addition facts table to them, so they can quickly look up addition facts. After a while, they will most likely learn the facts through the use of the table and become less reliant on it. To make the tables more durable, print them on card stock and laminate them. They can be displayed on a screen or enlarged and printed on poster paper for whole class use.

Five minute frenzy charts are 10 by 10 grids for addition fact practice. In each square, students write the sum of the column number and the row number.

Called mad minutes or timed drills by some, five minute frenzies are meant to be timed to add a little more excitement to practicing addition facts. They are ideally used to increase a student's ability to recall addition facts quickly which has all sorts of benefits later in their school life including preventing high school teachers from complaining about "how their students can't even add single-digit numbers without using a calculator."

A general goal to achieve would be to complete one chart in less than five minutes and score 98 percent or better, however, we recommend setting personal goals for students based on an initial test. If they are banging their head against the wall after a couple of minutes with only a few questions done, they really shouldn't be completing a timed addition facts drill at the moment. They still have some learning to do. We would recommend breaking out the manipulatives at this point. If they blast through the questions in 1.5 minutes and get almost all of them correct, they are probably ready for something a little more challenging.

Five Minute Addition Frenzies that include one addition chart per page 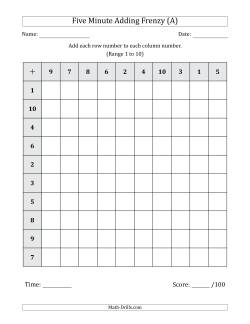 One-per-page addition frenzies are not the most efficient use of paper resources, but they are a good starting point especially for younger students who have not quite mastered their penmanship enough to fit their numbers into a smaller chart. They are also great for displaying on screens or monitors for group activities. For example, you might use an interactive white board to fill out the chart. 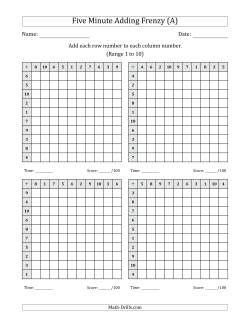 A wiser use of paper and photo-copy limits, having four charts on a page allows for multi-day practice, collaborative work or through the use of a paper-cutter, a quick stack of practice pages for students who finish early.

Most people would agree that being able to add single-digit numbers quickly and in your head is an essential skill for success in math. The various addition worksheets in this section focus on skills that students will use their entire life. These worksheets will not magically make a student learn addition, but they are valuable for reinforcement and practice and can also be used as assessment tools. 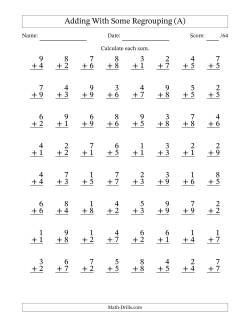 So, you need some practice sheets for addition facts? You've found them. Use these for practice, assessment, games or just for fun. 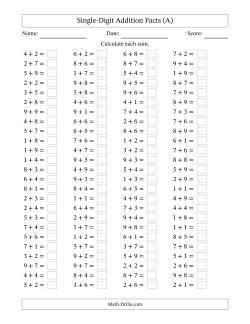 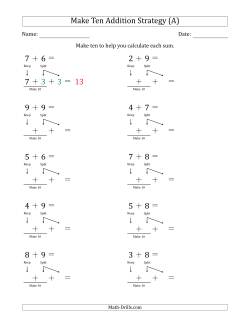 The make ten addition strategy involves "spliting" the second addend into two parts. The first part combines with the first addend to make ten and the second part is the leftover amount. The strategy helps students quickly add amounts over ten in their head. For example, adding 8 + 7, students first recognize that they need to add 2 to 8 to get 10, so they split the 7 into 2 + 5. The 8 + 2 makes 10 and 5 more makes 15. The skill can be extended to many situations, for example adding 24 + 9, students recognize that they need 6 more to get to 30 and 9 can be split into 6 + 3, so 24 + 6 = 30 and 3 more makes 33. Continuing on, students can work on recognizing "complements" of other important numbers (see section further down) to develop this strategy further. 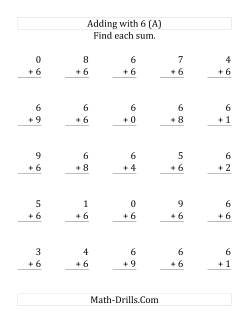 Focusing on one number at a time is necessary for some students. Maybe they get overwhelmed with too much information and need to experience success in small steps.

A variety of strategies can be used to learn multi-digit addition; it isn't necessary to rely only on paper and pencil methods. Base ten blocks can help students conceptualize addition. Teaching students a mental left-to-right addition skill will help them in future math studies and life in general. E.g. 34 + 78 would be 30 + 70 = 100, 100 + 4 = 104, 104 + 8 = 112. Don't forget about using estimation with these worksheets.

Multi-Digit Addition with SOME regrouping

Multi-Digit Addition with ALL regrouping 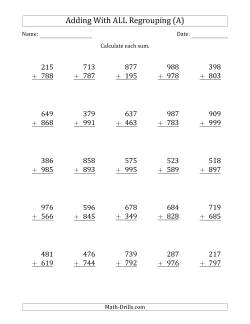 Regrouping is what long addition is all about; these worksheets give students a lot of practice since every step requires regrouping.

Multi-Digit Addition with NO regrouping 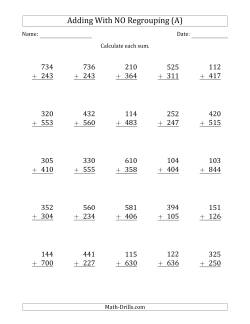 If you haven't quite mastered all the addition facts or the long addition algorithm, this might be the section for you. These worksheets don't require any regrouping, so they provide an extra in-between skill for students who require a little more guidance. 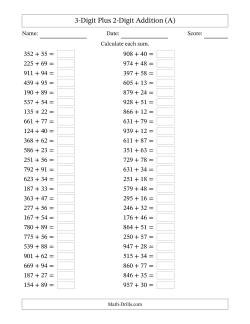 Horizontal addition can encourage students to use mental math or other strategies to add numbers. One of the most common mental math strategies for addition is a left-to-right (also called front end) addition strategy. This involves adding the greater place values first. Other strategies for adding multi-digit numbers include using base ten blocks or other manipulatives, number lines, decomposing numbers and adding the parts, and using a calculator. 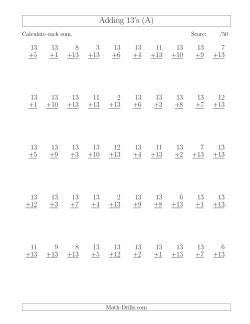 These worksheets include numbers greater than the ones further up the page. 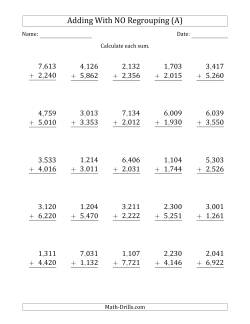 Using a comma to separate thousands is the most common way to format large numbers in the English world. 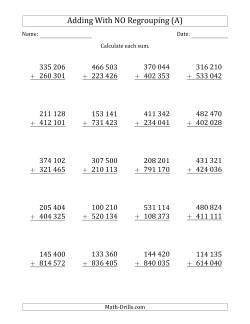 Using a space to separate thousands in large numbers is common in some languages. In the English world, you will most likely find Canadians formatting their numbers in this way. 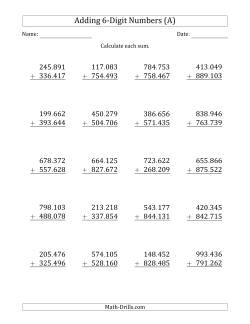 Using a period as a thousands separator is not generally seen in English-speaking countries, but since there are people from around the world who use these addition worksheets, they are included. 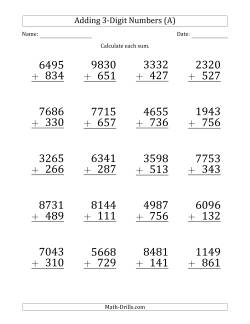 For various reasons, sometimes you need addition questions in a larger font. These should fit the bill. 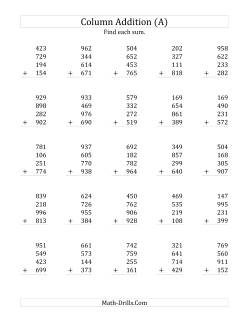 Column addition is not just an exercise in accounting, it also develops mental addition skills that are useful in everyday life. Various strategies are available for adding columns of numbers. The traditional method is to use a pencil and paper approach, also known as right-to-left addition, where students add and regroup starting with the smallest place (ones in this case) and proceed up to the greatest place. A mental approach might involve students going from left-to-right where the greater place is added first. This is easier to keep track of in your head, but does require the occasional adjustment in previous answers. An example is to add 345 + 678 + 901. First add the 300, 600 and 900 to get 1800, then add 40, 70 and 0 in turn to get 1910, then deal with the 5, 8 and 1 to get 1924. Along the way you had to adjust your total, but keeping a running total in your head is a lot easier than transfering a pencil and paper method into your head. 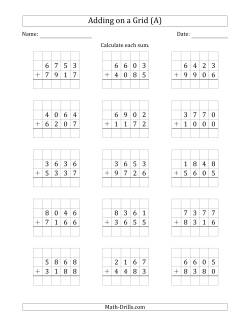 Adding with grid support helps students who have trouble lining up place values themselves. Perhaps with a little practice, they might get a better understanding of not only lining up the place values, but why this is done. Pointing out that the 5 in 659 means 50, for example, is useful in helping students understand place value as it relates to addition. 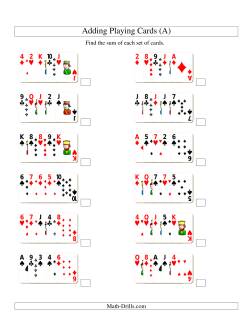 These adding worksheets also help students develop mental addition skills, but use a game context for familiarity and interest. For the adding with playing cards worksheets, a Jack is counted as 11, a Queen as 12, a King as 13 and an Ace as 1. Playing math games while enjoying some social time with their friends is a great way to develop strategic thinking and math fluency in children. 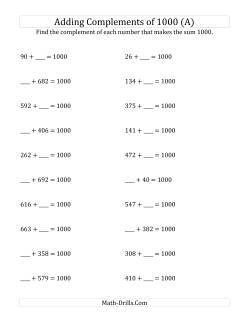 Finding complements of numbers can help students a great deal in developing mental arithmetic skills and to further their understanding of number. 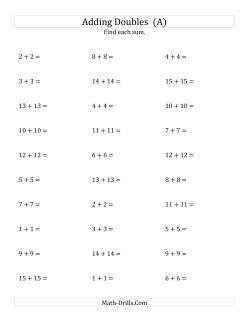 Using an adding doubles strategy can help students to process addition questions more quickly using mental math. To use this strategy, students must recognize that the two numbers are close to the same value (usually by one or two). They also must recognize by how much and whether it is greater or less than the first addend. A typical dialogue with the question, 15 + 16, might be, "I see that the second number is greater than the first number by 1. If I double the first number and add 1, I will get my answer. 15 doubled is 30 plus one is 31. 15 + 16, therefore, is 31."

Adding in other base number systems 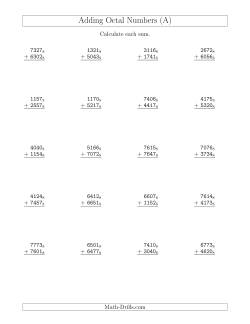 Not commonly taught in modern schools, adding in other base number systems can stretch students' minds and have quite a few important applications, especially in technology. For example, you will find binary, octal and hexadecimal systems are quite often used in computer technology. Quaternary numbers can be used in genetics to store DNA sequences. The duodecimal system is sometimes suggested as a superior system to the decimal system