Welcome to the Algebra worksheets page at Math-Drills.com, where unknowns are common and variables are the norm. On this page, you will find Algebra worksheets mostly for middle school students on algebra topics such as algebraic expressions, equations and graphing functions.

This page starts off with some missing numbers worksheets for younger students. We then get right into algebra by helping students recognize and understand the basic language related to algebra. The rest of the page covers some of the main topics you'll encounter in algebra units. Remember that by teaching students algebra, you are helping to create the future financial whizzes, engineers, and scientists that will solve all of our world's problems.

Algebra is much more interesting when things are more real. Solving linear equations is much more fun with a two pan balance, some mystery bags and a bunch of jelly beans. Algebra tiles are used by many teachers to help students understand a variety of algebra topics. And there is nothing like a set of co-ordinate axes to solve systems of linear equations.

Most Popular Algebra Worksheets this Week 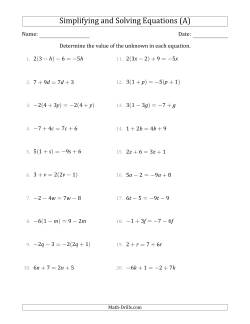 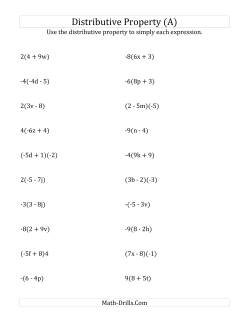 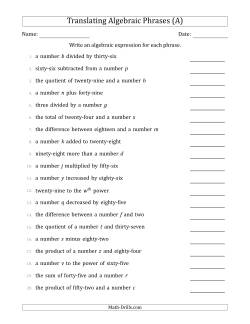 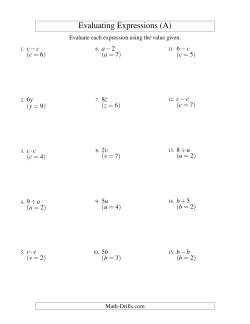 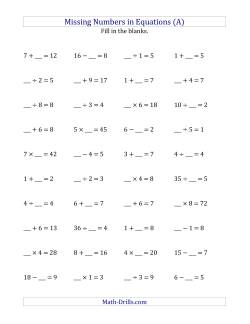 Properties and Laws of Numbers Worksheets

The commutative law or commutative property states that you can change the order of the numbers in an arithmetic problem and still get the same results. In the context of arithmetic, it only works with addition or multiplication operations, but not mixed addition and multiplication. For example, 3 + 5 = 5 + 3 and 9 × 5 = 5 × 9. A fun activity that you can use in the classroom is to brainstorm non-numerical things from everyday life that are commutative and noncommutative. Putting on socks, for example, is commutative because you can put on the right sock then the left sock or you can put on the left sock then the right sock and you will end up with the same result. Putting on underwear and pants, however, is noncommutative.

The associative law or associative property allows you to change the grouping of the operations in an arithmetic problem with two or more steps without changing the result. The order of the numbers stays the same in the associative law. As with the commutative law, it applies to addition-only or multiplication-only problems. It is best thought of in the context of order of operations as it requires that parentheses must be dealt with first. An example of the associative law is: (9 + 5) + 6 = 9 + (5 + 6). In this case, it doesn't matter if you add 9 + 5 first or 5 + 6 first, you will end up with the same result. Students might think of some examples from their experience such as putting items on a tray at lunch. They could put the milk and vegetables on their tray first then the sandwich or they could start with the vegetables and sandwich then put on the milk. If their tray looks the same both times, they will have modeled the associative law. Reading a book could be argued as either associative or nonassociative as one could potentially read the final chapters first and still understand the book as well as someone who read the book the normal way.

Inverse relationships with one blank

In these worksheets, the unknown is limited to the question side of the equation which could be on the left or the right of equal sign.

Missing numbers worksheets with blanks as unknowns (Blank in Any Position)

In these worksheets, the unknown could be in any position in the equation including the answer.

Missing numbers worksheets with symbols as unknowns (Symbol in Any Position)

Missing numbers worksheets with variables as unknowns (Variable on Left; Answer on Right)

Missing numbers worksheets with variables as unknowns (Variable in Any Position)

As the title says, these worksheets include only basic exponent rules questions. Each question only has two exponents to deal with; complicated mixed up terms and things that a more advanced student might work out are left alone. For example, 42 is (22)2 = 24, but these worksheets just leave it as 42, so students can focus on learning how to multiply and divide exponents more or less in isolation.

Knowing the language of algebra can help to extract meaning from word problems and to situations outside of school. In these worksheets, students are challenged to convert phrases into algebraic expressions.

Combining like terms is something that happens a lot in algebra. Students can be introduced to the topic and practice a bit with these worksheets. The bar is raised with the adding and subtracting versions that introduce parentheses into the expressions. For students who have a good grasp of fractions, simplifying simple algebraic fractions worksheets present a bit of a challenge over the other worksheets in this section.

Graphing linear equations and reading existing graphs give students a visual representation that is very useful in understanding the concepts of slope and y-intercept.

Solving linear equations with jelly beans is a fun activity to try with students first learning algebraic concepts. Ideally, you will want some opaque bags with no mass, but since that isn't quite possible (the no mass part), there is a bit of a condition here that will actually help students understand equations better. Any bags that you use have to be balanced on the other side of the equation with empty ones.

Probably the best way to illustrate this is through an example. Let's use 3x + 2 = 14. You may recognize the x as the unknown which is actually the number of jelly beans we put in each opaque bag. The 3 in the 3x means that we need three bags. It's best to fill the bags with the required number of jelly beans out of view of the students, so they actually have to solve the equation.

The last step is to divide the loose jelly beans on one side of the equation into the same number of groups as there are bags. This will probably give you a good indication of how many jelly beans there are in each bag. If not, eat some and try again. Now, we realize this won't work for every linear equation as it is hard to have negative jelly beans, but it is another teaching strategy that you can use for algebra.

Despite all appearances, equations of the type a/x are not linear. Instead, they belong to a different kind of equations. They are good for combining them with linear equations, since they introduce the concept of valid and invalid answers for an equation (what will be later called the domain of a function). In this case, the invalid answers for equations in the form a/x, are those that make the denominator become 0.

Other Polynomial and Monomial Expressions & Equations

Factoring expressions that do not include a squared variable

Factoring expressions that always include a squared variable

Inequalities worksheets including writing the inequality that matches a graph and graphing inequalities on a number line.

Writing the inequality that matches the graph