Thanks for visiting the U.S. number format version of the decimals and percents worksheets page at Math-Drills.Com where we make a POINT of helping students learn. On this page, you will find Decimals worksheets on a variety topics including comparing and sorting decimals, adding, subtracting, multiplying and dividing decimals, and converting decimals to other number formats. To start, you will find the general use printables to be helpful in teaching the concepts of decimals and place value. More information on them is included just under the sub-title. If you would prefer non-English format decimals (i.e. commas used as decimals), please visit the European Format Decimals page.

Most Popular Decimals Worksheets this Week

General use decimal printables are used in a variety of contexts and assist students in completing math questions related to decimals. 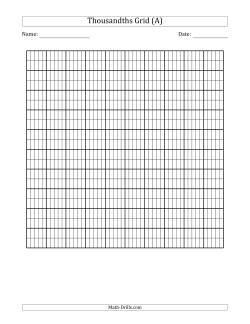 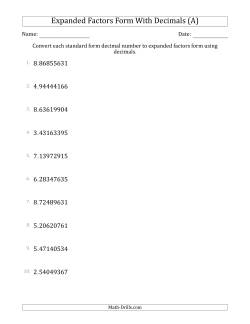 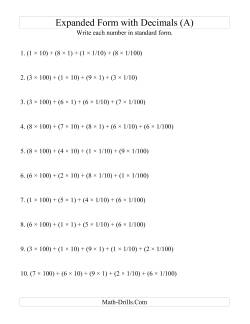 Of course, being able to convert numbers already in expanded form to standard form is also important. All five versions of decimal expanded form are included in these worksheets. 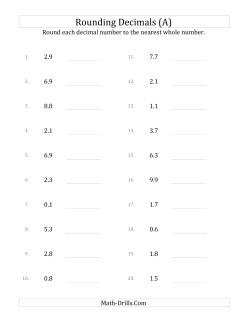 Rounding decimals is similar to rounding whole numbers; you have to know your place value! When learning about rounding, it is also useful to learn about truncating since it may help students to round properly. A simple strategy for rounding involves truncating, using the digits after the truncation to determine whether the new terminating digit remains the same or gets incremented, then taking action by incrementing if necessary and throwing away the rest. Here is a simple example: Round 4.567 to the nearest tenth. First, truncate the number after the tenths place 4.5|67. Next, look at the truncated part (67). Is it more than half way to 99 (i.e. 50 or more)? It is, so the decision will be to increment. Lastly, increment the tenths value by 1 to get 4.6. Of course, the situation gets a little more complicated if the terminating digit is a 9. In that case, some regrouping might be necessary. For example: Round 6.959 to the nearest tenth. Truncate: 6.9|59. Decide to increment since 59 is more than half way to 99. Incrementing results in the necessity to regroup the tenths into an extra one whole, so the result is 7.0. Watch that students do not write 6.10. You will want to correct them right away in that case. One last note: if there are three truncated digits then the question becomes is the number more than half way to 999. Likewise, for one digit; is the number more than half way to 9. And so on...

We should also mention that in some scientific and mathematical "circles," rounding is slightly different "on a 5". For example, most people would round up on a 5 such as: 6.5 --> 7; 3.555 --> 3.56; 0.60500 --> 0.61; etc. A different way to round on a 5, however, is to round to the nearest even number, so 5.5 would be rounded up to 6, but 8.5 would be rounded down to 8. The main reason for this is not to skew the results of a large number of rounding events. If you always round up on a 5, on average, you will have slightly higher results than you should. Because most pre-college students round up on a 5, that is what we have done in the worksheets that follow. 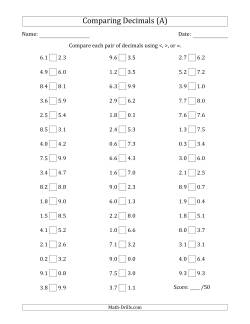 Students who have mastered comparing whole numbers should find comparing decimals to be fairly easy. The easiest strategy is to compare the numbers before the decimal (the whole number part) first and only compare the decimal parts if the whole number parts are equal. These sorts of questions allow teachers/parents to get a good idea of whether students have grasped the concept of decimals or not. For example, if a student thinks that 4.93 is greater than 8.7, then they might need a little more instruction in place value. Close numbers means that some care was taken to make the numbers look similar. For example, they could be close in value, e.g. 3.3. and 3.4 or one of the digits might be changed as in 5.86 and 6.86. 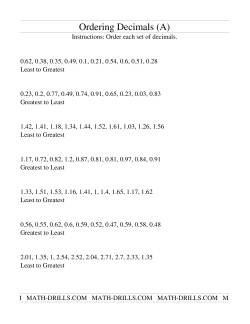 Ordering decimals is very much like comparing decimals except there are more than two numbers. Generally, students determine the least (or greatest) decimal to start, cross it off the list then repeat the process to find the next lowest/greatest until they get to the last number. Checking the list at the end is always a good idea.

Converting Decimals to Fractions and other Number Formats

Converting decimals worksheets mainly for converting between decimals and fractions but also to percents and ratios.

Converting decimals to fractions and other number formats 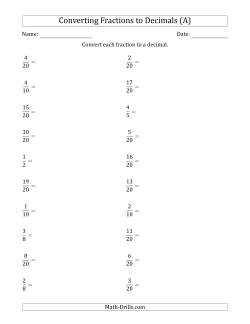 There are many good reasons for converting decimals to other number formats. Dealing with a fraction in operations is often easier than the equivalent decimal. Consider 0.333... which is equivalent to 1/3. Multiplying 300 by 0.333... is difficult, but multiplying 300 by 1/3 is super easy! Students should be familiar with some of the more common fraction/decimal conversions, so they can switch back and forth as needed. 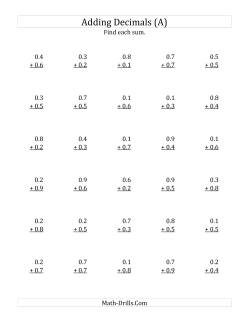 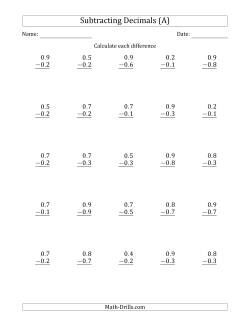 Base ten blocks can be used for decimal subtraction. Just redefine the blocks, so the big block is a one, the flat is a tenth, the rod is a hundredth and the little cube is a thousandth. Model and subtract decimals using base ten blocks, so students can "see" how decimals really work. 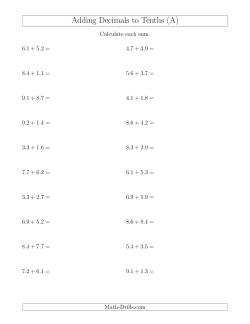 Adding and subtracting decimals is fairly straightforward when all the decimals are lined up. With the questions arranged horizontally, students are challenged to understand place value as it relates to decimals. A wonderful strategy for placing the decimal is to use estimation. For example if the question is 49.2 + 20.1, the answer without the decimal is 693. Estimate by rounding 49.2 to 50 and 20.1 to 20. 50 + 20 = 70. The decimal in 693 must be placed between the 9 and the 3 as in 69.3 to make the number close to the estimate of 70.

The above strategy will go a long way in students understanding operations with decimals, but it is also important that they have a strong foundation in place value and a proficiency with efficient strategies to be completely successful with these questions. As with any math skill, it is not wise to present this to students until they have the necessary prerequisite skills and knowledge.

Multiplying and dividing decimals worksheets with a variety of difficulty levels. 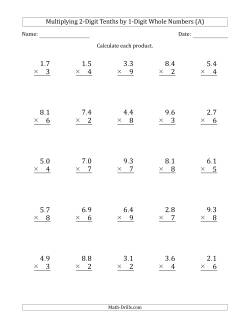 Multiplying decimals by whole numbers is very much like multiplying whole numbers except there is a decimal to deal with. Although students might initially have trouble with it, through the power of rounding and estimating, they can generally get it quite quickly. Many teachers will tell students to ignore the decimal and multiply the numbers just like they would whole numbers. This is a good strategy to use. Figuring out where the decimal goes at the end can be accomplished by counting how many decimal places were in the original question and giving the answer that many decimal places. To better understand this method, students can round the two factors and multiply in their head to get an estimate then place the decimal based on their estimate. For example, multiplying 9.84 × 91, students could first round the numbers to 10 and 91 (keep 91 since multiplying by 10 is easy) then get an estimate of 910. Actually multiplying (ignoring the decimal) gets you 89544. To get that number close to 910, the decimal needs to go between the 5 and the 4, thus 895.44. Note that there are two decimal places in the factors and two decimal places in the answer, but estimating made it more understandable rather than just a method. 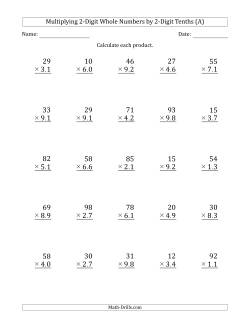 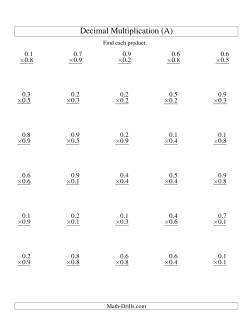 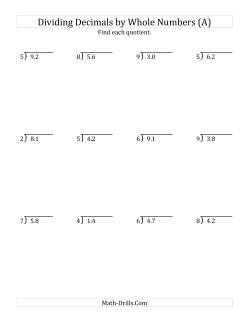 Dividing with quotients that work out nicely 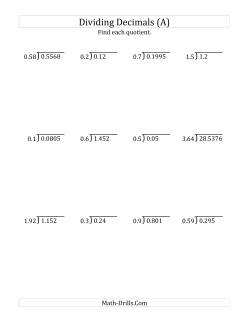 In case you aren't familiar with dividing with a decimal divisor, the general method for completing questions is by getting rid of the decimal in the divisor. This is done by multiplying the divisor and the dividend by the same amount, usually a power of ten such as 10, 100 or 1000. For example, if the division question is 5.32/5.6, you would multiply the divisor and dividend by 10 to get the equivalent division problem, 53.2/56. Completing this division will result in the exact same quotient as the original (try it on your calculator if you don't believe us). The main reason for completing decimal division in this way is to get the decimal in the correct location when using the U.S. long division algorithm.

Dividing decimal numbers doesn't have to be too difficult, especially with the worksheets below where the decimals work out nicely. To make these worksheets, we randomly generated a divisor and a quotient first, then multiplied them together to get the dividend. Of course, you will see the quotients only on the answer page, but generating questions in this way makes every decimal division problem work out nicely. 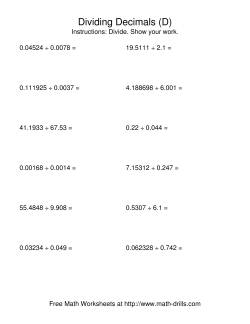 These worksheets would probably be used for estimating and calculator work.

Order of Operations with Decimals Worksheets

Order of Operations with Decimals 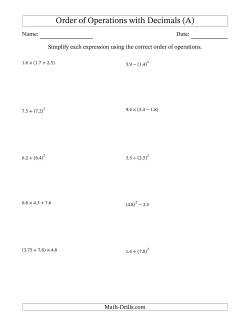 The order of operations worksheets in this section actually reside on the Order of Operations page, but they are included here for your convenience.

Order of Operations with Comma Decimals 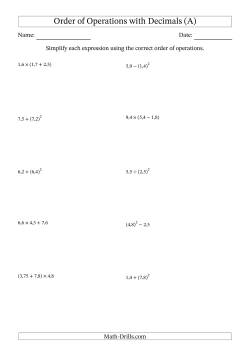 The order of operations worksheets in this section actually reside on the Order of Operations page, but they are included here for your convenience. 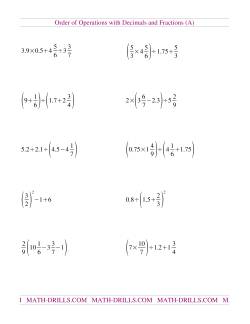