Welcome to the division worksheets page at Math-Drills.com! Please give us your undivided attention while we introduce this page. Our worksheets for division help you to teach students the very important concept of division. If students have a good recall of multiplication facts, the division facts should be a breeze to teach. If you want your students to experience success in learning division, please make sure they know their multiplication facts to 81, how to multiply by 0 and how to multiply by 10. If they don't know these things, this is going to take a lot longer.

On this page you will find many Division Worksheets including division facts and long division with and without remainders. We start off with some division facts which as you know are just the multiplication facts expressed in a different way. The main difference is that you can't divide by 0 and get a real number. If you really want your students to impress, say at their dinner table when their parents ask them what they learned today, you can teach them that division by zero is undefined.

The rest of the page is devoted to long division which for some reason is disliked among some members of the population. Long division is most difficult when students don't know their multiplication facts, so make sure they know them first. Oh, we already said that. What about a long division algorithm... maybe the one you or your parents or your grandparents learned? We adamantly say, yes! The reason that you and your ancestors used it is because it is an efficient and beautiful algorithm that will allow you to solve some of the most difficult division problems that even base ten blocks couldn't touch. It works equally well for decimals and whole numbers. Long division really isn't that hard.

Most Popular Division Worksheets this Week 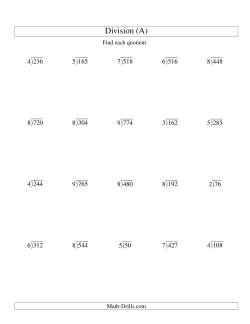 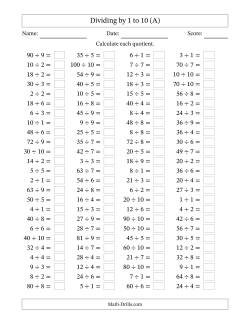 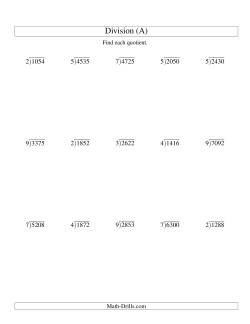 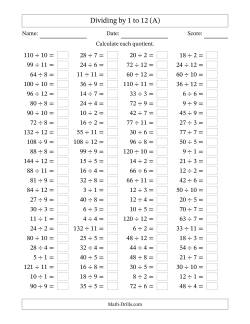 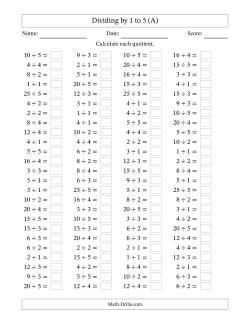 Manipulatives can help students "get" the concept of division. For example, students could regroup base ten blocks into units, then divide the units into piles. For example, 81 ÷ 9 would end up being 9 piles of 9 units.

Division is essentially asing the question, "How many _____'s are in _____?" For the question, 81 ÷ 9, the prompt would sound like, "How many 9's are in 81?" This prompt will benefit students in later math studies when there are more complex concepts such as dividing decimals or fractions. "How many thirds are in four?" or even better,, How many third cups are in four cups?" If necessary, get out the measuring cups.

Long division worksheets with no remainders

We might also mention that this method can be even more sophisticated by using multiples of powers of ten. In the above example, using 54 × 5 = 270 would have helped to get to the quotient quicker.

Have you ever thought that you could help a student understand things better and get a more precise answer while still using remainders? It's quite easy really. Remainders are usually given out of context, including on the answer keys below. A remainder is really a numerator in a fractional quotient. For example 19 ÷ 3 is 6 with a remainder of 1 which is more precisely 6 1/3. Using fractional quotients means your students will always find the exact answer to all long division questions, and in many cases the answer will actually be more precise (e.g. compare 6 1/3 with 6.3333....).

Long Division on a Grid

Long division with grid assistance and NO remainders worksheets

Some students find it difficult to get everything lined up when completing a long division algorithm, so these worksheets include a grid and wider spacing of the digits to help students get things in the right place. The answer keys include the typical steps that students would record while completing each problem; however, slight variations in implementation may occur. For example, some people don't bother with the subtraction signs,some might show steps subtracting zero, etc.

Long division with grid assistance and SOME remainders worksheets

Worksheets for practicing divisibility rules including a variety of small and large numbers and focusing on various divisors.

Dividing in Other Base Number Systems

Dividing in other base number systems