Welcome to the measurement worksheets page at Math-Drills.com where you can measure up, measure down or measure all around! This page includes Measurement worksheets for length, area, angles, volume, capacity, mass, time and temperature in Metric, U.S. and Imperial units.

You may also be interested in using our Unit Converter

Most Popular Measurement Worksheets this Week 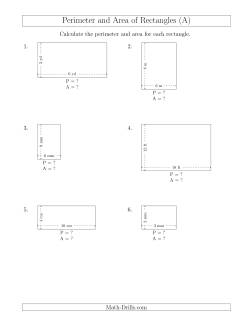 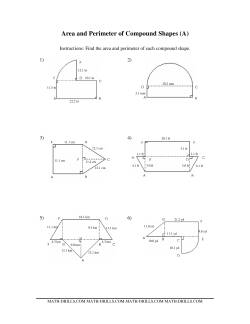 Area and Perimeter of Compound Shapes (248 views this week) 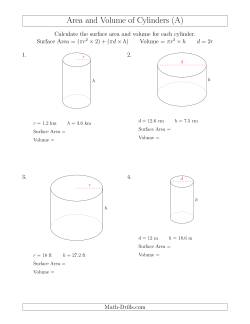 Calculating Surface Area and Volume of Cylinders (230 views this week) 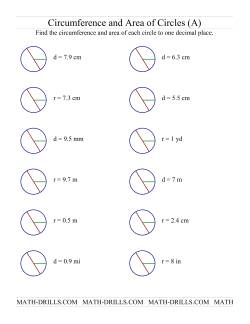 Circumference and Area of Circles (222 views this week)

Is there anything that we talk about more than the weather? Maybe, but make sure your students are prepared to impress their friends and family by ensuring they understand how to read temperatures and how to convert between two commonly used temperature scales.

Measuring length, mass and volume worksheets including many for converting between units and between measurement systems.

Measuring length is so much more interesting if you can send students out with rulers and have them measure items in their environment. What is the width of the textbook? the classroom? the school? We've never met a student who didn't enjoy using a measuring wheel (you know the one that clicks every time you've traveled a yard or a meter). How do you know they've measured things correctly though? Well, you might need something like we've provided below. You can also compare students' measurements of the same objects to see if they got the same measurement. Let's say, you had 20 students measure the height of the doorway. You should get 20 very similar answers (unless they are the sharing type then you'll get exactly the same answers) and any different answers can be quickly identified.

The liquid measurement worksheets include gills because this is the key unit that results in more fluid ounces in an Imperial gallon than in a U.S. gallon. You can learn more about gills in our liquid measurement conversion guide.

Converting within the Metric system

Converting between Metric units is really an exercise in multiplying and dividing by powers of ten. In a perfect situation, students would be taught the prefixes of the Metric system and their relationships to powers of ten which they could apply to any prefix and any unit. Until they do that, however, take it one step at a time and focus on the most common Metric units with the worksheets below. We've kept it fairly simple with three significant digits in each question.

Converting between Metric and U.S. customary units can be accomplished in a number of ways and usually takes a little knowledge of fractions and/or decimals. Most commonly, students will use a formula to convert and round the values. You may like our converting inches and centimeters with rulers worksheets for students who have difficulty with manipulating the numbers and formulas and need an easier method.

Measuring angles worksheets with a variety of ranges from which to choose.

Rectangles are fairly straight-forward polygons to measure since it is easy to find rectangles that use whole numbers. Rectangles are generally used when students first learn about perimeter and area and it is an opportune time to teach students that units are an essential part of any measurement. Without units, numbers are meaningless. Get your students into the habit of expressing all of their measurements with the correct units before they learn how to measure other polygons. Especially make sure they know that area is always expressed with squared units.

If a student is just starting to learn about perimeter and area, a few hands-on activities to learn the concepts is a good idea. Have them use square tiles to cover an area, have them paint a piece of paper and see how much paint is required. Create rectangles with straws and pipe cleaners and fill with square tiles to differentiate between perimeter and area. See if there are differently shaped rectangles that will hold the same number of square tiles.

Calculating the perimeter and area of rectangles

Calculating the area and perimeter of triangles

Area and Perimeter of Other Polygons Worksheets

Worksheets for calculating the area and perimeter of polygons other than triangles and rectangles.

Calculating the area and perimeter of parallelograms

Calculating the area and perimeter of trapezoids

Calculating the area and perimeter of trapeziums

Calculating the area and perimeter of mixed shapes

We mixed up the shapes on the worksheets in this section. These area and perimeter worksheets would be best suited to students who have mastered finding the areas of triangles, rectangles, parallelograms, and trapezoids. For students who need an extra challenge, give them the compound shapes worksheet, but make sure they know how to find the area and circumference of a circle first.

Radius, diameter, circumference and area are all related measurements; you only need one of them to find the remaining measurements. Diameter and radius are the simplest ones because the diameter of a circle is twice the radius and, conversely, the radius is half the diameter. To calculate between radius/diameter and circumference/area, you need to use π (pi). Depending on your accessibility to calculators or computers, you may use many digits of pi in the calculation or just a few. Often, people without calculators use an estimate of pi (3 or 3.14). Just for fun we made a worksheet with pi to 100,000 decimal places. The calculations on the worksheets below use a fairly precise version of pi; you may have to adjust the answers if you use more rounded versions of pi.

Worksheets for calculating the volume and surface area of various 3-dimensional objects.

Volume and surface area of prisms and cylinders

Volume and surface area of spheres

Volume and surface area of cones