Welcome to the money worksheets page at Math-Drills.com where you will not be short-changed! This page includes Money worksheets for counting coins and for operations with Dollars, Euros, and Pounds.

Students encounter money early on, and they must be able to manage it themselves in their everyday lives and into adulthood. There are many activities that you can do related to counting, adding, and subtracting money, so save some coins or purchase some play money to complete some of the activities on the money math worksheets below.

Most Popular Money Worksheets this Week 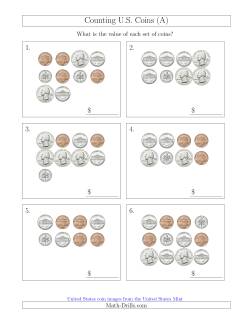 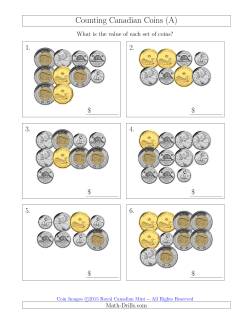 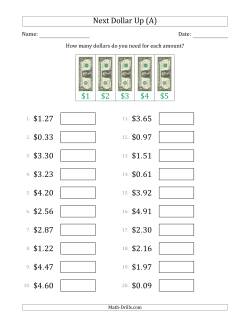 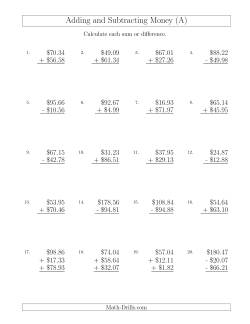 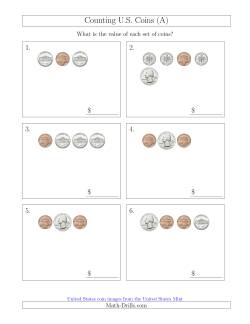 Counting coins worksheets in small and large collections in a variety of currencies.

This is a great place to start with younger students as they are likely to encounter coins before they encounter too many bills. Including children in money transactions helps them to develop important money management skills and has benefits in other math topics such as fractions.

Until everyone starts paying with their smart phones and microchips in their fingers, coins are still a thing. The U.S. Mint still makes billions of coins every year and children will probably encounter them very early on in their life. Knowing how much money you have in coins can be accomplished with a coin counting machine, or it can be accomplished in the old fashioned "usin' yer noggin" way.

Tapping your credit or debit card is probably going to make coins less of a thing in the future, but for now, they are still a ubiquitous item in pockets from coast to coast.

No one likes their coins better than the U.K. With pockets full of eight different coin values, reinforced stitching on trouser pockets and handbags is common place. Learning to count all of these coins is a feat in itself, but the worksheets in this category should help.

The next dollar up is a skill for young students who are not yet able to make change, but can determine how many dollars it will take to cover an amount. For example, if something is $5.45 in a store, then they would need to give $6 to cover that amount since the next dollar up from $5.45 is $6. Students should understand that any amount above zero after the decimal means they need to add another dollar to the number before the decimal in order to have enough to pay for the item. The rest of the worksheets in this section are general rounding questions involving dollar amounts.

Adding money amounts worksheets in a variety of currencies and increments.

Adding money amounts is a nice way to gently move students into thinking about decimals and what a great opportunity to use some manipulatives. Students generally perform better with math that has meaning. Decimal numbers to hundredths have most likely been in students' lives since very early on as stores display prices, parents comment about the prices to help develop critical thinking in their children, so if there is one decimal that students understand well, it is money. They sometimes have trouble relating it to paper and pencil which is why manipulatives come in handy. Play money is a little cheaper than real money and doesn't disappear quite as quickly.

Adding dollars with increments specifically for the U.S. and Canada

Adding Dollars with increments specifically for Australia and New Zealand

Subtracting money amounts worksheets in a variety of currencies and increments.

The strategy of choice for subtracting money is the counting up strategy. It works especially well for giving change from whole dollar/Pound/Euro amounts. Following is an example of how it works. Let's say the bill at the grocery store came out to $13.46 and the cashier was presented with a $20.00 bill and for some odd reason, the monitor on his cash machine had a crack in it that obscured the amount of change to give. What would he do?! The first thing to do is to take four cents out of the drawer because he needs to add the $13.46 to an unknown amount to make $20, and four cents will bring the $13.46 up to $13.50 which makes things rounder and, for most, a little easier. Next, he needs to pull out two quarters to bring the amount up to $14 even. He can then remove a dollar bill to make the amount $15, and finally pull out a $5 bill to count up to $20. Now, if he wanted to know how much change he gave, he just needs to think back to what he pulled out of the drawer: $5 + $1 + $0.50 + $0.04 = $6.54.

Subtracting dollars with increments specifically for the U.S. and Canada

Subtracting Dollars with increments specifically for Australia and New Zealand

Mixed adding and subtracting money amounts worksheets in a variety of currencies and increments.

Adding & Subtracting dollars with increments specifically for the U.S. and Canada

Further worksheets will be released as soon as the Reserve Bank of New Zealand releases more banknotes from Series 7.

It would be nice if our own money could multiply quite as nicely in our bank accounts as it does on these worksheets. Alas, we will have to settle with low interest rates multiplying our money over the span of decades. These multiplying money worksheets would go well with some money manipulatives. Simply make several piles of the same amount (the same number of piles as the multiplier), combine it all into one pile, regroup as much as possible (e.g. five ones into a five), and count up the results.

Dividing Dollar amounts (for Australia and New Zealand) (A4 Size)