Welcome to the number sense page at Math-Drills.com where we've got your number! This page includes Number Worksheets such as counting charts, representing, comparing and ordering numbers worksheets, and worksheets on expanded form, written numbers, scientific numbers, Roman numerals, factors, exponents, and binary numbers. There are literally hundreds of number worksheets meant to help students develop their understanding of numeration and number sense.

In the first few sections, there are some general use printables that can be used in a variety of situations. Hundred charts, for example, can be used for counting, but they can just as easily be used for learning decimal hundredths. Rounding worksheets help students learn this important skill that is especially useful in estimation.

Comparing and ordering numbers worksheets help students further understand place value and the ordinality of numbers. Continuing down the page are a number of worksheets on number forms: written, expanded, standard, scientific, and Roman numerals. Near the end of the page are a few worksheets for older students on factors, factoring, exponents and roots and binary numbers. 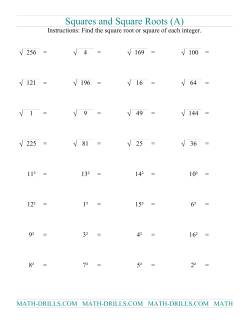 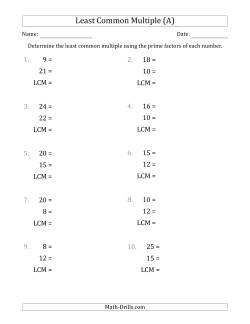 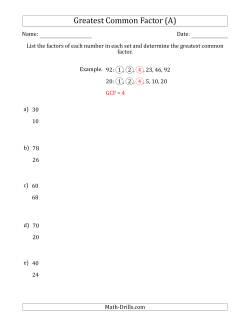 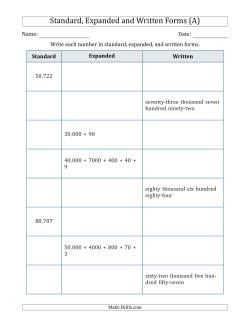 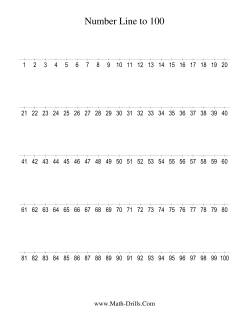 There are a few different number posters in this section. The first two, with bird and butterfly themes include various ways of representing numbers from 0 to 9. Two versions of the numerals are used to demonstrate different printing styles, a Braille version and an American Sign Language version are also included to make students aware of different ways of representing each number. A linear representation and a ten-frame representation follow which is then followed by a pictorial representation using the theme. The poster sized numbers are just that ... made for printing and putting up in your classroom or home school.

Ten frames help students visualize numbers in relation to 10. They are used for many purposes, but the worksheets below are introductory and familiarize students with ten frames and give them practice using them.

Skip counting with a car theme

These skip counting worksheets include pictorial representations of the items the student is counting. For example, in the counting by 3's worksheet, students will see groups of three cars. This allows students to develop a mental image of skip counting. With larger numbers, including groups of items become impractical, so numbers are instead printed on the cars.

Hundred charts are useful not only for learning counting but for many other purposes in math. For example, a hundred chart can be used to model fractions and to convert fractions into decimals. Modeling 1/4 on a hundred chart would require coloring every fourth square. After coloring every fourth square, there would be 25 squares colored in which is 25/100 or 0.25. Not magic, just math. Hundred charts can also be used as graph paper for graphing, learning long multiplication and division or any other purpose. A common use for hundred charts in older grades is to use it to find prime and composite numbers using the sieve of Eratosthenes.

120 charts are very similar to hundred charts except they include the numbers from 101 to 120. 120 is a nice number for many reasons. One reason is that it has a lot of divisors—16 in fact. This makes the number 120 useful for many different grouping activities. Another reason is the Common Core Curriculum in the United States requires first graders to count to 120. A third reason is that 120 includes some three-digit numbers which could be a good introduction for some students into the hundreds place.

Backwards or Counting Down 120 Charts (1 to a page)

Counting collections of things in various patterns helps students develop shortcuts and strategies for counting. For example, when students count collections of items in rectangular patterns, they may use skip counting or multiplying to speed up their counting.

There are much better number line worksheets on the Number Line Worksheets page.

Not only does rounding further an understanding of numbers, it can also be quite useful in estimating and measuring. There are many every day situations where a precise number isn't needed. For example if you needed to paint your basement floor, you don't really need to find out the area to exact square inch since you don't buy paint that way. You get a good idea of the floor space (e.g. it is roughly 20 feet by 15 feet) then read the label on the can to see how many square feet the can of paint covers (which, by the way is also a rounded number and variable depending on the roller used, the porosity of the floor, etc.) and buy enough cans to cover your floor.

Even and Odd numbers

Distinguishing between even and odd numbers is an important skill for young students to learn. The vocabulary of even and odd is used throughout their math education, so it is necessary to learn it as soon as possible. Connecting cubes can help a great deal in visually demonstrating odd and even numbers. Create the numbers from 1 to 10 (or more) using connecting cubes in pairs and students will quickly see that the odd numbers have an unpaired cube that can be thought of as the "odd cube out." Once they have seen this pattern, they may be able to extend the pattern without making cube models. Ask them about 11 and 12 and 35 and so on.

There are many situations where it is important to know the relative size of one number to another. Several words are used to describe the relative sizes of one number to another, but it is probably best to use lesser than, greater than and equal to, although other words are more appropriate in certain situations. For example, if you were comparing two groups of candies, you would probably say, "there are fewer candies in that pile than in that one." The use of "Tight" in the worksheet titles means the numbers to be compared are close to one another.

These versions use a space as a thousands separator.

These versions use a period as a thousands separator.

Writing and reading numbers worksheets for students to learn how to write numbers in words and vice-versa.

The main idea of learning to write numbers in words is to be able to say numbers correctly. In the past it might also have been useful for writing checks/cheques, but there isn't a lot of that going on any more.

Now, let's see if students can write the numbers that are written! The reading numbers written as words worksheets do not have format options as the student question sheets are all written in words. The answer keys are formatted with a comma thousands separator when necessary.

The standard, expanded and written forms conversion worksheets sum up the previous sections by including all three number forms on the same page.

Scientific notation worksheets for learning how to write and interpret numbers in this format.

This is about as "old school" as you can get. Put on your tunica and pick up your scutum to tackle the worksheets on Roman Numerals. Below, you will see options for standard and compact forms. The standard form Roman Numeral math worksheets include numerals in the commonly-taught version where 999 is CMXCIX (i.e. write the numeral one place value at a time). The compact versions are for those who want more of a challenge where the Roman numerals are written in as concise a version as possible. In the compact version, 999 is written as IM (i.e. one less than 1000).

What would factoring be without some factoring trees? They are probably the most elegant and convenient way to find the prime factors of a number, but they take a little practice, which is where we come in. The worksheets below are of two types. The first is finding all of the factors of a number. This is great for students who know their multiplication/division facts. If they don't, they might find this a little frustrating, so go back and work on that first. The second type is finding prime factors which we've chosen to do with tree diagrams. Among other things, this is a great way to find prime numbers and to practice divisibility rules.

Roots and exponents worksheets including squares and cubes and writing exponents in factor form.

Binary and Other Base Number Systems

The binary number system has broad applications, but it is most known for its predominance in computer architecture. Learning about the binary system not only encourages higher order thinking, but it also prepares students for further studies in mathematics and computer studies. The chart below may be useful for students who need some help lining things up and learning about place value as it relates to the binary system. We included a base 10 number column, so you can use the chart for converting between decimal and binary systems.


The mystery number trick below is actually based on binary numbers. As you may know, each place in the binary system is a power of 2 (1, 2, 4, 8, 16, etc.). Since every decimal (base 10) number can be expressed as a binary number, each decimal number can therefore be expressed as a sum of a unique set of powers of 2. It is this concept that makes this trick work. You might notice that the largest decimal number on the cards is 63 which is also the largest 6-digit binary number (111111). The target position on each version of the mystery number trick contains the powers of 2 associated with the first 6 place values in the binary system (1, 2, 4, 8, 16, 32). Each of the 6 cards represents a specific place value. All 32 numbers on each card contain a 1 in the associated place when written in binary. Basically, when the "friend" identifies the cards that contain the mystery number, they are giving you a binary number that simply needs converting into a decimal number. Just for fun, we mixed up the numbers on the cards and the target position on versions C to J. Version A includes numbers in ascending order and version B includes numbers in descending order. The other versions (B to J) will be available once you click on the A version below.

Converting between base number systems worksheets

Help with Converting Between Base Number Systems: