Welcome to the Place Value worksheets page at Math-Drills.com! This page includes Place value worksheets for whole numbers and decimals including place value charts. Students who have a good understanding of place value will certainly excel at math. They will be better at estimating, calculating, and conceptualizing and may go on to great mathematical success in school and beyond. 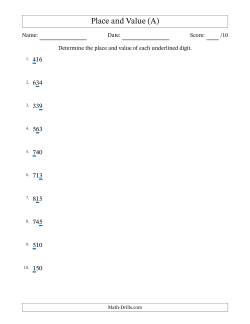 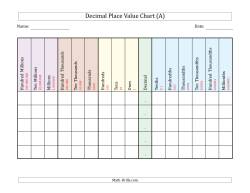 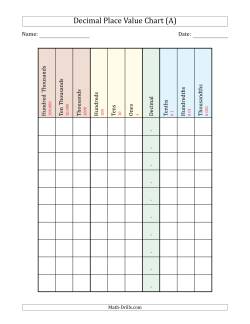 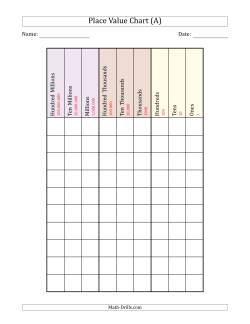 Place Value Chart (Hundred Millions to Ones) (106 views this week) 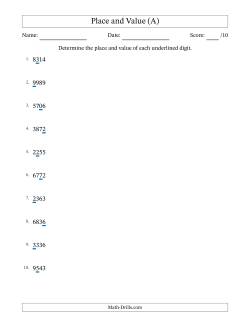 The main difference in the decimal place value charts in this section is that a comma is used as a decimal. Many countries outside of North America use this number format, so these are available for international visitors.

Starting at the very beginning, students learn the names of numbers and probably how to count. They may start encountering individual numbers in writing, and learn how to identify them. Then things start getting complicated! Two- and three-digit numbers start to enter their lives and they must learn how to name those, and that is when a good knowledge of place comes in handy. In order to say the number 793, for example, children must know that the 7 is in the hundreds place, the 9 is in the tens place and the 3 is in the ones place to be able to say, "Seven hundred ninety-three."

The determining place value and digit value worksheets are listed first in this section as they are the ones that are used most frequently. Students are asked to identify both the place value and the value of an underlined digit. For example if the 4 in 45,678 was underlined, the place value is 10,000 and the value of the digit is 40,000. If students need a little more instruction to help them learn place value, the identifying place only worksheets might help. In those, students only have to determine which place is underlined. For example, if the 5 was underlined in 45,678, they would say the thousands place is underlined.

Similar to the last section, but the numbers in this section are formatted with thin spaces for thousands separators as you might find in Canada or other English countries that have adopted the Metric (or S.I.) system. The final worksheet has students re-write numbers with spaces as thousands separators.

The worksheets in this section are similar to the previous two sections, but use a point-comma format for numbers where the point is used as a thousands separator and a comma is used as a decimal.

The Euro format uses a comma for a decimal and periods for thousands separators.