Welcome to the Subtraction Worksheets page at Math-Drills.com where you will get less of an experience than our other pages! This page includes Subtraction worksheets on topics such as five minute frenzies, one-, two-, three- and multi-digit subtraction and subtracting across zeros.

Subtraction has been around for several years now... well maybe more than a few, so it's probably a good thing for students to learn. People experience subtraction every minute of their lives from banks and the government taking away your money to the cookies in the jar mysteriously disappearing. With a good knowledge of subtraction, you can understand why your bank account reaches zero and do something to prevent it from happening.

Some students do have difficulty with subtraction, so take it easy on them. Help them to learn their addition facts first. Once they know those, they will need a few more strategies to successfully subtract. Teaching with manipulatives like base ten blocks or cereal or insects in the park can help students gain a deeper understanding of subtraction. The subtracting worksheets on this page are meant to support good teaching practices, so only use them for independent learning if students are practising skills they already know.

We use the words, minuend, subtrahend and difference on this page. Please refer to the following, so you know which word means which part of a subtraction question.

Most Popular Subtraction Worksheets this Week 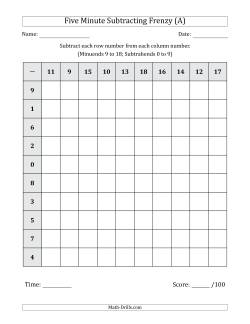 Five minute subtraction frenzies are timed practice charts that help students develop subtraction fact recall speed. These charts are similar to the addition and multiplication frenzy charts, but due to the nature of how subtraction works, we could not focus solely on the single digit fact families. For example, you might get questions like 18 - 4 = 14. You also have to be aware that you must subtract the row number from the column number to get a positive number (or zero). Other than that, they should be a nice way to practice some mental subtraction. As with most of these pages, please only use them as a timed activity with students who will experience success. If a student does not have the necessary skills to complete a frenzy in under five minutes, you may need to take a different approach to how you deliver this page. For all others, students should be able to complete this page in under five minutes with a 98% or greater accuracy and improve their time as they get more practice.

Subtracting single-digit facts is a skill that students generally learn after or while they are learning single-digit addition facts. The subtraction worksheets below are meant to be used for practice, testing or as a teaching skill. They will not teach students how to subtract or what the connection is between addition and subtraction; for that, students require a teacher or parent. If students are learning their subtraction facts, please use the suitable page below. For example, if your student has just learned subtracting by 3, then you will probably want to choose a subtraction worksheet that focuses on 3 as a subtrahend. 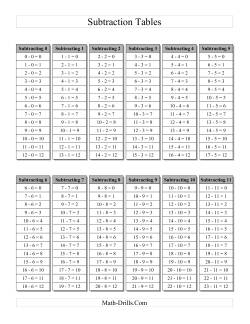 Most of the subtraction tables in this section are meant to be used as a reference for students learning their subtraction facts. After a while, most students will remember the facts and recall them easily when completing math problems.

Some students might find it easier to start with subtraction facts with minuends (the first number) limited to 9 or lower. This way, they don't need to count across 10 eliminating that extra pesky digit... for now.

Subtracting from minuends up to 18 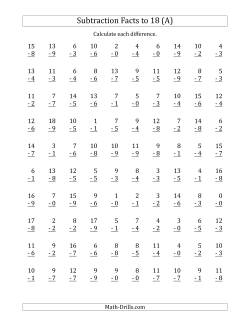 *The worksheets marked with an asterisk below include all possible questions in a random order on each version of the worksheet. 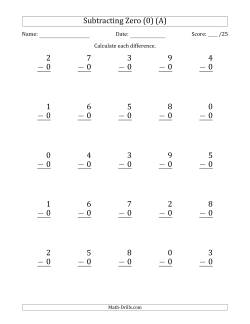 Sometimes students just need to reinforce a single number at a time which is where these worksheets come in. There are three sets of worksheets in this section, each with a different number of questions. The last set is the most interesting as there are no questions repeated. Eleven and Twelve have been included as they are essentially subtracting by 10 and 1 or 2 more. 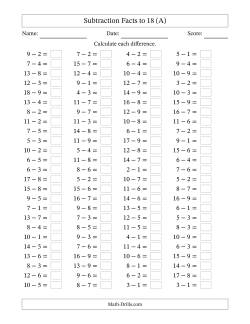 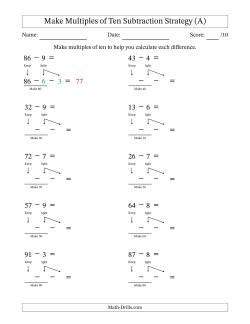 The make ten subtraction strategy involves "spliting" the subtrahend (amount being subtracted) into two parts. The first part should be the exact amount that will reduce the minuend (the first number) to ten (or multiple of ten as the case may be) and the second part is the leftover amount. The strategy helps students internalize a mental strategy for subtracting across tens. For example, with the question 15 - 9, students first recognize that they need to subtract 5 to get 10, so they split the 9 into 5 and 4. Subtracting 5 from 15 results in 10 and subtracting 4 more results in 6, so 15 - 9 = 6. This strategy can be used any time students need to subtract "over" a multiple of ten and there are many worksheets in this section to practice it. For example, subtracting 84 - 8, students recognize that they must subtract 4 from 84 to get 80 which leaves 4 more to subtract from 80 to get 76.

Subtraction worksheets including questions with two or more digits for practicing subtracting strategies with larger numbers.

Try teaching a mental math strategy for subtraction called counting up. Here is how it is done:

Start with the second number (the subtrahend) and count up by tens until you find the closest value to the first number (the minuend). Keep track of how many tens you counted. Add or subtract a single digit number to get the minuend exactly then adjust the tens by that amount. For the question, 84 - 35, start at 35, and count, 45, 55, 65, 75, 85 (five tens) and one down to get 84. Five tens minus one is 49. For the question 65 - 22, start at 22 and count, 32, 42, 52, 62 (four tens) and three up to get 65. Four tens and three is 43. The previous examples used two-digit numbers, but the strategy can swiftly be modified for larger numbers. How far can your students go with it? Here is an example with three-digit numbers:

Multi-Digit Subtraction with SOME regrouping 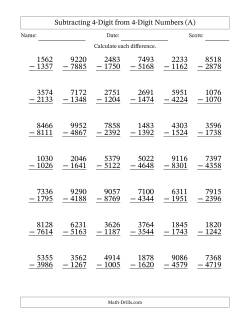 These are classic subtraction worksheets with randomly generated numbers. Regrouping should be necessary about half of the time. Versions with ALL regrouping and NO regrouping follow. If you would like to see numbers with thousands separators, look a little further down the page and choose the appropriate version for your location. 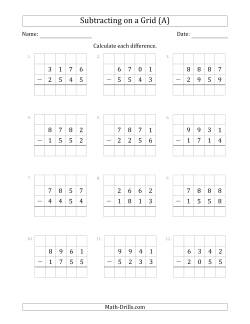 For students who need a little extra help with lining things up, these subtraction worksheets have the digits spaced further apart on a grid. The answer keys also show the carrying values to help diagnose where things went wrong (but hopefully they won't).

Multi-Digit Subtraction with ALL regrouping 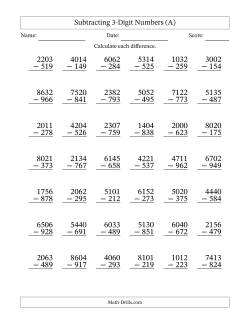 These subtraction worksheets include questions that require regrouping at every step. They can be frustrating and difficult for students who are not familiar with the concept of subtraction. Try showing them with base ten blocks how regrouping works.

Multi-Digit Subtraction with NO regrouping 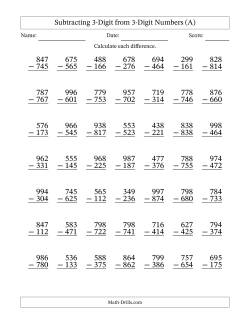 Some students require a little extra help when learning to subtract large numbers. These subtraction worksheets include questions where the regrouping step has been eliminated. This might help students learn a subtraction algorithm before learning about regrouping. 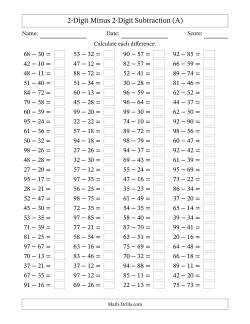 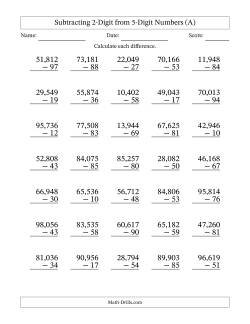 Many students in English-speaking countries are used to seeing numbers with comma-separated thousands. 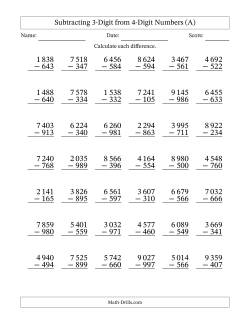 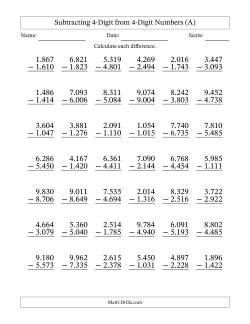 Even though period separated thousands are not common in the English-speaking world, we provide these for our friends in other countries who may find them useful.

Large print subtraction worksheets that include a larger font. 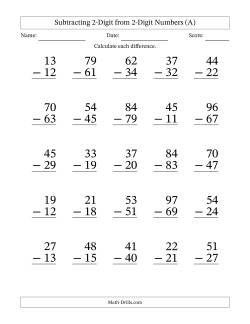 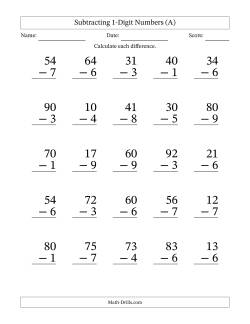 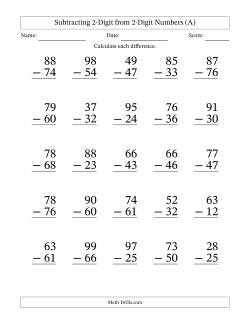 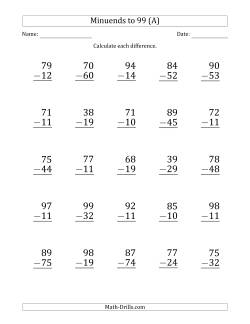 Subtracting Across Zeros and Calculating Complements

Subtracting across zeros worksheets for students to learn and practice this important skill.

Complements of powers of 10 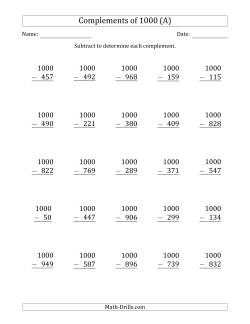 Subtracting from multiples of powers of 10 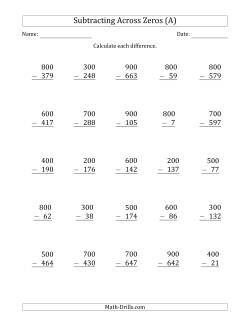 Subtracting Across Zeros in the Middle 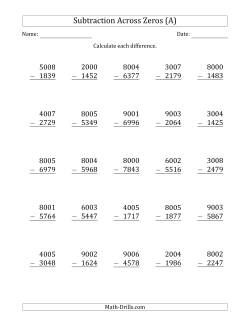 These worksheets are meant to give students practice dealing with 0's in the middles of subtraction questions. Whether using pencil and paper or mental arithmetic, it is always a good idea to make sure students know what to do when they encounter zeros.

Subtracting in Other Number Systems

Subtracting in other base number systems 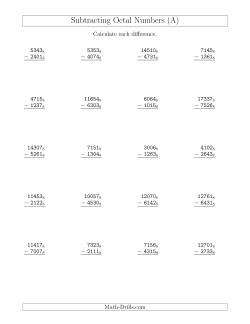